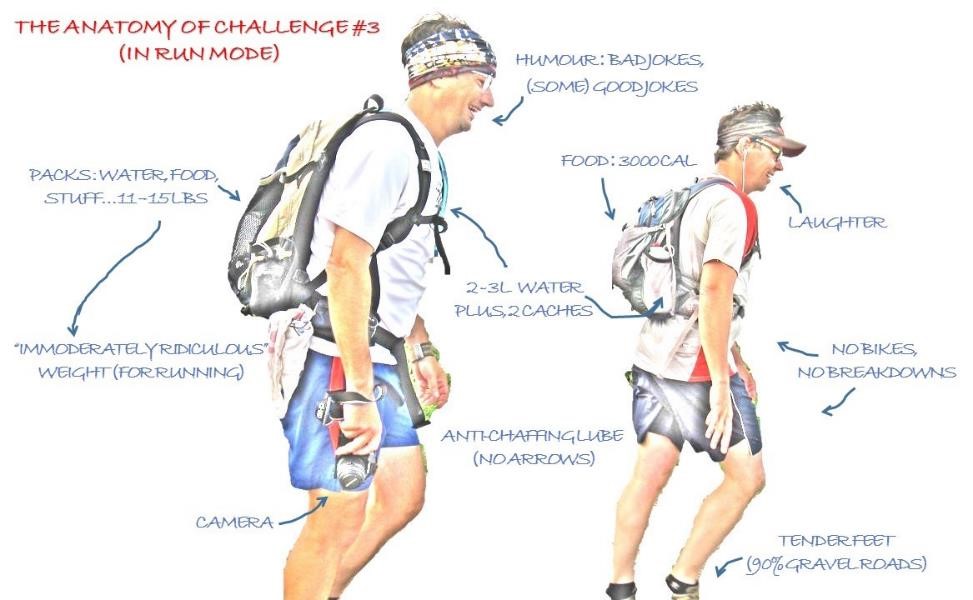 The Summer Challenges have been on my radar for the past few years. Last year (2015), I was involved in some early discussions about running Challenge #3 but for various reasons that didn’t pan out. Then a few months ago, Joel Toews put out a call to a few runners to attempt the run. He keenly reminder us, if successful, this would be the first Operation Muerto Summer Challenge to be completed on foot.

In the end, our group size settled on four participants – myself (Alain Dupuis), Joel Toews, Rhéal Poirier and Dallas Sigurdur. We declared our run to take place on August 20th (2016). While I knew Joel and Rhéal very well, I had only met Dallas a few weekends prior to our attempt. I quickly discovered we were in for a fun time with this guy! He seems to have an endless number of stories. It was like listening to a podcast mix on a long road trip. I mean this in a positive way; there were no dull moments.

The Challenge on Foot

Various versions of the route were drafted but the final route primarily followed nearly 90 kms of gravel road. The route looped from Morden to Pembina Valley Provincial Park to “The Cairn” and then back to Morden.

From a runner’s perspective, Challenge #3 is probably the most approachable given you are never very far from a farm house or the occasional passer-by in a pick-up truck. If you get into trouble, there are ways out.

The lack of water sources is the main logistical difficulty. There’s potable water at Stanley Park, a municipal park, and there’s a non-potable water tap at the Pembina Valley Provincial Park. Aside from that, you can plan a route to intersect “Dead horse creek” or “Dead horse slough” but somehow those sources don’t sound too promising. The Pembina River is similarly questionable when you watch the cattle defecating while wading in its shallow depth. 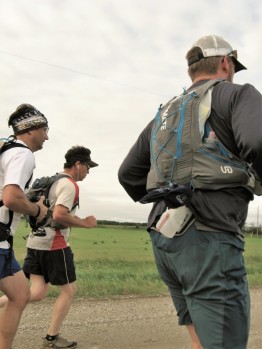 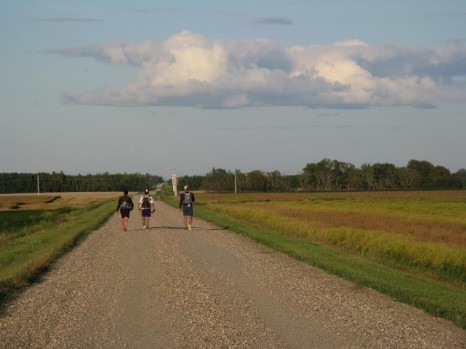 We opted to cache water in two locations – one site four miles north of Pembina Valley Provincial Park and the second site at “The Cairn” at the intersection of Hwys 3 and 31. In addition, we all carried between two and three litres in our packs. We had plenty of water. The ideal weather helped, temperatures stayed cool and topped out at about 20C.

Our itinerary for the day, designed by Rhéal, followed gravel roads with a few miles on a dirt road. The gravel roads were great to run and none had loose gravel to unnecessarily aggravate the footing. That being said, we all mentioned some soreness underfoot from the hard surface all day. The scenery was beautiful and typical of southern Manitoba prairie farmland. Lots of sunflowers and corn in this part of the province.

There were some gently rolling hills during the first part of our journey from Morden to Pembina Valley Provincial Park. And just north of the park, the Pembina River valley represents the most significant elevation change on the route. We travelled across the valley twice as an out and back section to our loop. In comparison, after leaving the Pembina valley behind, the route seemed flatter all the way to “The Cairn” and back to Morden. 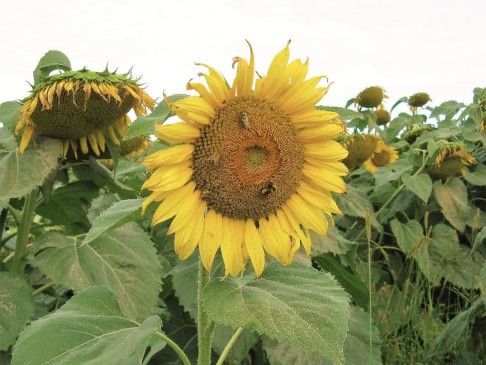 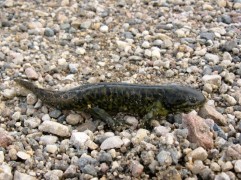 The Walk in Progress

As the day progressed we started to walk more frequently. There was certainly some physical deterioration but overall the group stayed positive throughout. As Dallas put it, we’ll be sorry to disappoint the readers because we don’t have any stories of puking, crying or all out meltdowns to report. Personally, my day went very well. I felt I could have run more but I was quite happy to have walked as much as we did. In all likelihood it saved my legs and feet from a more severe beating.

From the start of our adventure, the promise of greasy food became an important motivator. Prior to the attempt, Joel discovered that Darlingford, a small town conveniently located a mile or so from the “The Cairn” checkpoint, had a diner (the Railway Diner) that served pulled-pork poutine. Well, that was enough for us. Whenever things slowed down or breaks started getting too long, someone would say “pulled-pork” or “poutine” and off we went. We really wanted to get there before they closed at 8pm.

All in all it was a great day: we started our run from Morden at 7:15 am and returned in the dark at 10:33 pm; we made our predicted time of just under 16 hours (15:48); we made it to the diner before closing time (although, we all decided gravy would be too much to stomach) and; best of all, we had a blast enjoying great companionship.