With my Germanic roots I come honestly with a love of order when it comes to preparing for challenges such as this. Weeks before an event I’ll adapt a list from a previous run and then use it to make sure I’ll have everything I need, and nothing I don’t. I also really enjoy test-packing, figuring out where gear will go. So two days before Challenge #3, I was test packing, bent over to get some socks out of my drawer and a familiar twinge went through my back. Instant pain and tightness ensued, and all I could think was that there was no way I could participate in this challenge.

If it was just myself, I would have cut the cord, accepted defeat and moved on. However, there were three other gentlemen who had declared with me and I really didn’t want to miss out. Alain Dupuis, the rock, Mr. Consistent. Rheal Poirier, logistics wizard and downhill assassin. And last, but not least Dallas Sigurdur, fount of unbelievable stories, encourager and world-class pacer. The team was set, I had to at least attempt the challenge.

Saturday morning arrived too quickly and I left the house at 5:00 AM, picked up the guys and we were on our way to the Tim’s in Morden. The closer we got, the worse my back felt. Driving was not helping. When we hit the junction on highway 3 to turn west toward Morden, I was quickly coming to the realization that perhaps even starting this challenge was a bad idea. However, when we arrived at Tim’s, got moving around, took a final bathroom break, it was go time. Off we went, leaving at just after 7:00 AM. I had to go, because if we’re honest, us ultra folk aren’t really known for our wisdom in making good, normal decisions.

We left Morden and were quickly on gravel, traveling south, then west, and to the south again. The first thing we noticed was the plethora of rock cairns and plaques. Turns out this area of the province is rife with history. Either that, or a surplus of rocks, which I’m sure is also partly true. Regardless, it was interesting and fodder for many conversations. We continued until Stanley Park for a quick bathroom break. It’s a beautiful park, not too far from Morden and includes camping, large open fields, a disc golf course and a few picnic shelters. 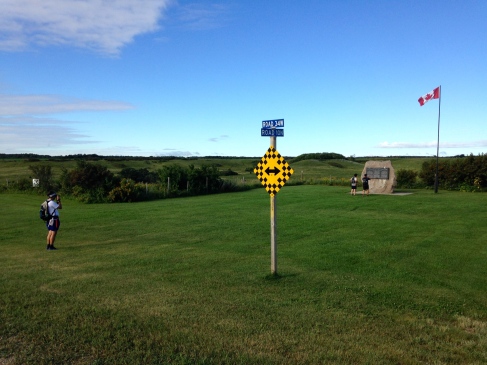 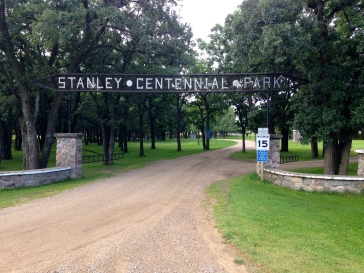 We continued toward Pembina Valley Provincial Park, and shortly after one of our cached water drops, the road opened up ahead of us as we entered the beautiful, lush, treed valley. It really felt like going home in many ways. I grew up in Manitou which is about 30 minutes west of Morden and spent a lot of time at Pembina Valley Bible Camp which we ran by on our way to the Provincial Park. We bombed down the hill, Rheal took off, pictures were taken and we made it down to the river. Then up….and up….and up…. Eventually we made it up the other side and to the shelter at Pembina Valley Provincial Park. Many of my years spent in that area was prior to the creation of the Provincial Park, so I had never been there. It was beautiful. We had a short break, did some eating and were on our way again. 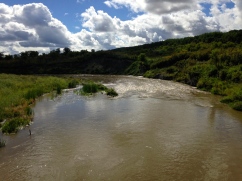 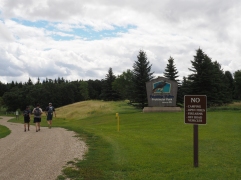 Eventually, after another trip through the valley and more gravel than we could shake a stick at, we made our way to La Verendrye Park, the cairn near Darlingford. Once again we had water cached here, topped up and then made our way into town. Rheal, previously, in doing a google search, found a diner in town and we knew that if we made it in time, we needed to make a stop. Needless to say, the motivation is pretty high when we’re talking burgers, fries and sugary drinks.  When I ordered, I wanted a few drinks, so I asked for a chocolate milk, apple juice and Dr. Pepper. Apparently that’s a lot of drinks because I got quite the look, and a laugh. As was suspected, a break, food, and three drinks and all becomes right with the world again. 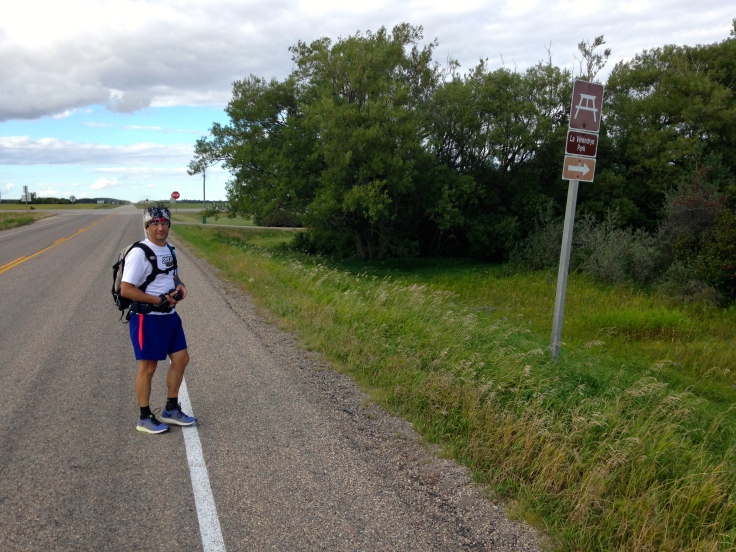 After a quick supper, all we needed to do was get out of town, then it was a straight shot east to Morden. We had slowed down considerably during this section. Among the four of us, I was by far the slowest, but prior to leaving we agreed that it would be a no-drop run and that we would stick together, and we did. Without question, the other three were much stronger than me, but my back miraculously held up and we continued to trudge toward Morden. The sun set behind us, it started to cool a bit. Ahead of us, a beautiful orange moon coming up over the horizon. Other than a few dogs that barked a bunch and got a little close for comfort, it was a beautiful evening and we were very lucky with an amazing day. 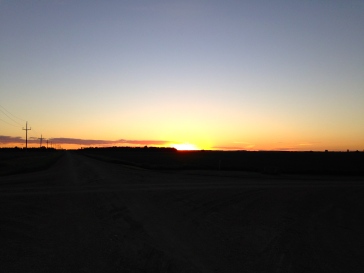 Eventually we arrived in Morden, one mile through town, and were back to Tim’s, just before 11:00 PM, covering about 55 miles. A short trip to McDonalds for more fat, salt, sugar and protein, and we were back to Winnipeg.

In some ways, we recognize that this is probably a boring report. No one, including Dallas, puked. There was no carnage. We just consistently and stubbornly moved forward, one step at at time, staying hydrated and fed and we got it done.

Thank you to the organizers of Operacion Muerto, it’s such a great thing

and we’re glad we could become the first people to complete a challenge on foot. Thank you to Alain, Rheal and Dallas. The day was definitely more enjoyable with you and I’m glad we could do this together. And of course, thanks to my family. Colleen, Joshua and Lucas for letting me do these crazy adventures.

P.S. For those who care. My nutrition (other than dinner at the diner) consisted of; Nuun Tablets & Water, about 8 gels, Ms. Vickies Sea Salt & Malt Vinegar Chips, trail mix, Swedish Berries, Skittles, mango slices and a Snickers bar. Didn’t have any stomach issues (of course we were going fairly slow), and felt pretty good throughout.